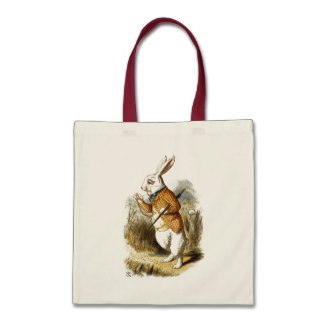 Colorized version by Sir John Tenniel. The White Rabbit is a fictional character in Lewis Carroll’s book Alice’s Adventures in Wonderland. He appears at the very beginning of the book, in chapter one, wearing a waistcoat, and muttering “Oh dear! Oh dear! I shall be too late!” Alice follows him down the rabbit hole into Wonderland. Alice encounters him again when he mistakes her for his housemaid Mary Ann and she becomes trapped in his house after growing too large. The Rabbit shows up again in the last few chapters, as a herald-like servant of the King and Queen of Hearts.
See more of our Alice In Wonderland Gifts.